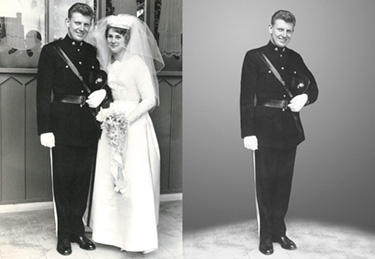 It’s not what you think! Not a domestic dispute ending with the bride being removed. Laurel called in about having a photo of her husband in his army uniform on his own. He had passed away 17 years ago, and Laurel was getting his army medals mounted with a picture of him going with the medals.

Laurel wanted a simple photo where her husband was standing with a plain background behind him. I removed the bridal image, filled in the missing parts of the image and added in a simple graduating background. Laurel was extremely happy with the final result.