Robyn came to see me about restoring an old faded aerial photo of their old farm property. Where their farm was is now a large real estate development in Maunu.

Robyn had a modern aerial photo of the land and wanted the old one bought up to scratch. I suggested to Robyn, first if she was able to locate the photographers that took it they may have the original negative and get a copy.
Robyn was able to track the image down to Aerial Surveys, previously called Geosmart. They sold her a high quality scan, whereupon Robyn came back to see me to get it printed. It looked like new and was a very close match to the new photo – apart from all the houses!

Welcome to 2011! With a week of work already underway, Photo Enhancements has hit the ground running with more orders to complete and new projects in the works. The season starts this year with discount specials on multiple order prints. We’re also doing one print specials on request. Tell us your requirements and we’ll be only too glad to help.

What a great summer it’s been so far – weather and work wise. December especially was a record month as more artists joined up to get high quality canvas (giclee) reproductions made of their work. Also a big thanks to all the professional and amateur photographers for using my services.

Next year is looking to be a big year. I’ll be taking a well earned break until January 10th, but will take enquiries on Dec 30 and 31. Have a great break!

Another oil painting scanned and archived for Fiona Goulding. Fiona does wonderful oil paintings and uses my services to archive her work. This great painting is called “Highlanders” after the Highlander cattle depicted in the painting. Fiona can be contacted about purchasing her artworks at fiona.goulding@actrix.co.nz

Fiona Goulding contacted me regarding having her artworks scanned for archival and future reproduction. Fiona is a visual artist with four oil paintings she wanted high quality scans made of. Above are 2 of the 4 she had me do. Fiona was very happy with the final copies made.

If you’re interested in purchasing any of her paintings Fiona can be contacted at fiona.goulding@actrix.co.nz 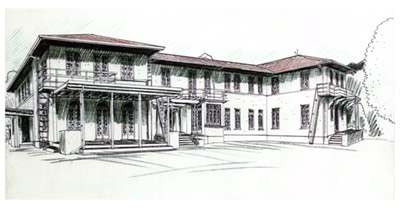 Ann came to see me about having three old architect conceptual sketches copied and printed. They were old sketches made of the old Whangarei Hospital and newer base hospital. They had been laminated over, were looking tatty, with rips and tears.

The images measured over 600mm wide. They were scanned, restored and printed onto my matt art paper. The images came out looking colourful and vibrant. Ann was very pleased with the final prints.

It’s that time of year again! The National Masters Hockey Tournament is being held in Nelson this year, and I’ll be playing in the 40-45 year old age group. As a consequence, I’ll be likely out of contact until Monday 8th of March.

All work has been done to the last minute, all enquiries handled. Now it’s time for hockey! If I have internet access I’ll try and remain in contact.

Just updated is the logo header image for my website and blog. I wanted a simple logo covering the type of work I did – ie printing images onto canvas and photo paper, as well as restoring and altering photos. The camera outline is my own camera, and  printer  my own  after doing a large print. The image to the right is a stylized image of a railway line I took a few years ago, representing the art work I print for customers and myself.

It may not be the flashest, but I made it myself and am happy with the final result.

It’s been a busy few weeks, with canvas and photo restoration orders coming in. Just finished, scanning 1100 negative images for a customer – a huge undertaking, but juggling with other work all finished in good order. Also some new gliclee art reproductions in the process of being prepared for a local artist I deal with  – these will look fantastic when they’re finished. December will be a busy month! 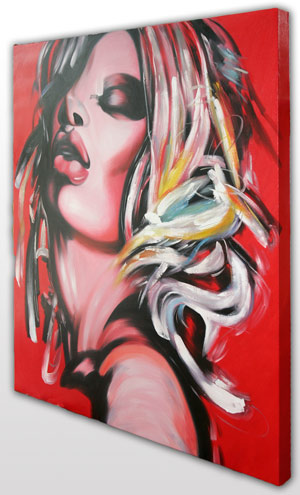 I had this interesting job to do this week. Kim called by to see if I could mount this painting she’d bought. Kim had been in previously looking at getting a photo put onto canvas but decided she wanted this painting done first.

The difficult part was the top of the painting had been trimmed as you see it in the photo. So I couldn’t wrap any of the top around to the back like I normally do. Needless to say I had to do a bit of thinking how to mount it and came up with doing an edge glue to the top front 1cm of the canvas onto the mdf backing.

From there it was a matter of doing the rest the normal way. To finish off the top/top-rear, I glued on a strip of plain canvas, which Kim would paint later on to closer match the rest of the painting. The frame measured 950mm x 875mm so it was quite a large one!

Kim called me later to thank me for the wonderful job and said she’d be back to have those photos put onto canvas.